We’ve perfect perdiction your optimal solution in servicing and maintenance

What we offer to our clients 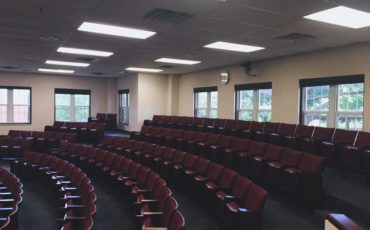 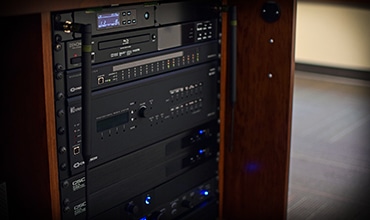 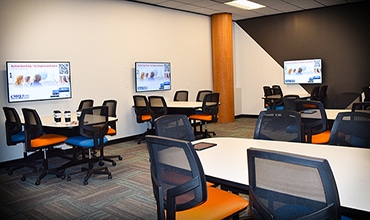 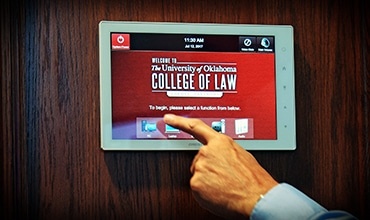 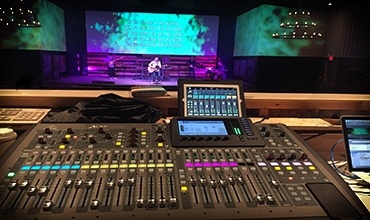 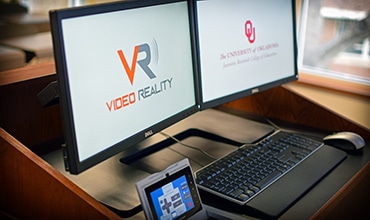 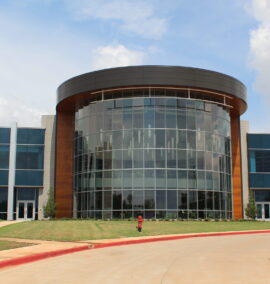 In an effort to better serve the residents of Edmond, Francis Tuttle Technology Center embarked to build a 155,000 square foot state of the art facility.  Programs including entrepreneurship, pre-nursing, cosmetology, automotive service technology, and interactive media are available for students. Working with Francis Tuttle, Video Reality quickly learned one of the largest themes for the expansive facility was collaboration.  The ability for 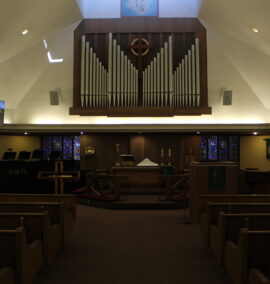 A need for an upgraded, easy to use, affordable video and audio system was met for St. Paul’s Lutheran Church. Video Reality crafted the perfect solution to meet their needs. A Yamaha TF1 digital mixer with 17 faders was installed in place of the previous analog mixer. DSP was be applied per channel inside the digital mixer and settings were saved for recall. 8 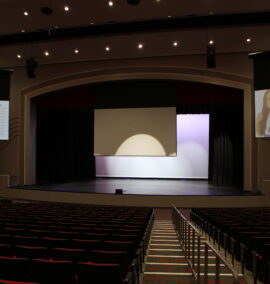 When construction began for the Performing Arts Center in Elgin, the need for an innovative and precise audio/visual installation was not only required, but an absolute necessity . This multi million dollar project needed the help from Video Reality. By having this exceptional achievement in audio/visual design, Elgin Schools now have a place to provide great performances from students. It will give them a 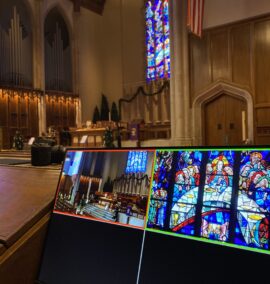 In the midst of a pandemic that has kept it’s most vulnerable at home, Houses of Worship have come to rely on livestreaming services to maintain some sort of normalcy in these trying times. First Presbyterian Church of Oklahoma City made the call to Video Reality to help in a much needed upgrade of their existing camera system. Keeping things as crystal clear for 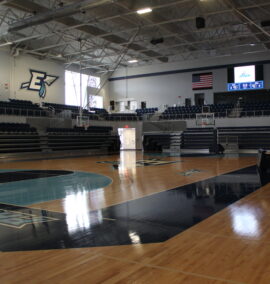 With the creation of the new Enid High School competitive gymnasium and performing arts center in 2019, Enid Public Schools wanted to take their facility to another level. This first-class facility provides much-needed space and accommodations for athletics, academic, music, drama, media productions and more. The call to Video Reality was made to take this facility to the peak of performance. A distributed video 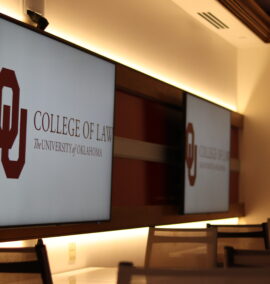 The goal of this project at the College of Law, at the University of Oklahoma in Norman, was to create completely unified collaboration spaces with ease of use. It’s aesthetically pleasing design offers a glimpse of the technological advances it offers. In the ALC Classroom, eight 75″ NEC displays were installed on custom sliding mounting plates that allow the screens to move smoothly side 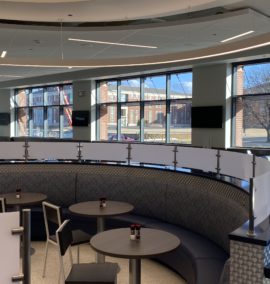 The first floor consists of a combination of 27 digital menu boards, as well as digital signage displays that are remotely managed with Samsung MagicInfo platform. The main dining area has an audio system with 6 zones of audio allowing for well distributed sound. Wireless microphones and an input plate make this area the perfect space for presentations. A large projector and screen were 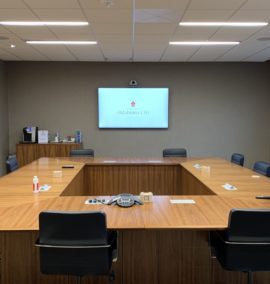 When the Archdiocese of Oklahoma City contacted Video Reality, the need to be able to host clear and concise video conferencing meetings across the state was imperative. The board room has a large square conference table which made getting even the microphone coverage difficult. A TeamConnect2, mounted in the middle of the false ceiling, was the perfect solution. It picks up the 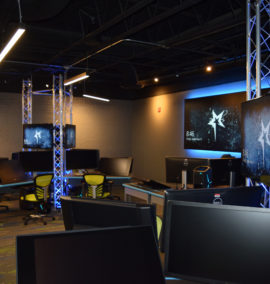 Video Reality helped bring Oklahoma City University’s Animation Lab to life using the latest equipment in audio/video and networking.  The Animation Lab gives students the opportunity to learn game design, 3D animation, CGI among other platforms.  OCU’s goal was to have an innovative and highly flexible matrix with the ability to easily route any input to any output.   Video Reality chose Crestron’s NVX 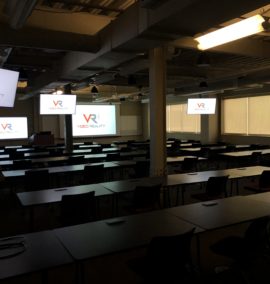 The challenge: A deep low ceiling classroom providing poor visibility, hard surfaces and too few speakers creating intelligible audio for speech and a complicated control system with too many available options. In Gould Hall, The University of Oklahoma had a particular challenge with visibility and intelligibility in Room 230. This is a large classroom was not originally suited for displaying and sharing information 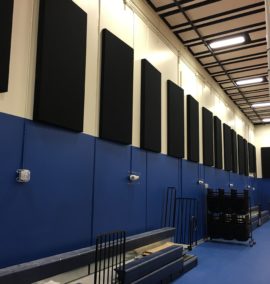 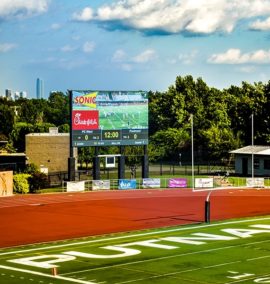 There is nothing better than getting new clothes, shoes, and school supplies for the start of a new school year and showing them off to your classmates. It’s not often a school itself gets to show off its new digs, but that is exactly what happened for Putnam City North, home field to one of 3 Putnam City high schools in Oklahoma City, OK. 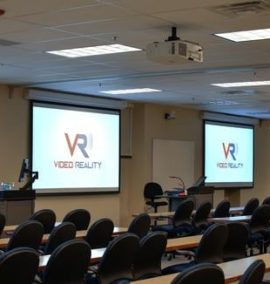 In 2017, Video Reality was given the opportunity to revamp the Oklahoma City University’s Kramer School of Nursing’s combinable classrooms.   Task: Create a modern solution to allow instructors to present to a differing number of students in large combine-divide rooms while utilizing some existing infrastructure. Purpose: Students need to be able to be engaged by one or more instructors easily and efficiently with minimal 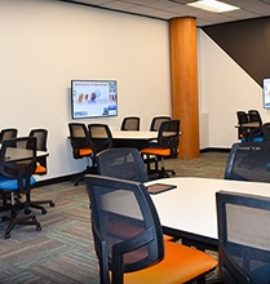 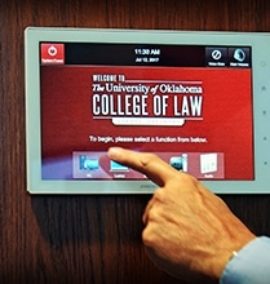 The University of Oklahoma – College of Law Video Reality was tasked with creating an innovative and cutting edge solution for the University of Oklahoma’s College of Law Library. We implemented Crestron Control modules in each seminar room to provide the ability for input switching, volume adjustment, video muting, and room scheduling. Each study pod also received their own Crestron Control modules as well as

We provide innovative product solutions for

Searching for a adanced manufactring unit for your company

How Digital Signage and Video Walls Benefit In Today’s World

Esports In Schools and How It Increases Student Participation

Esports is growing rapidly, and so is their need for advanced AV. With more than $1 billion in Esports revenue coming in last year, the future of gaming tournaments is bright and more schools are adding it to the extracurricular schedule. Students from all backgrounds and abilities have the capability of joining the activity without having the worry of not being able to “stack up” athletically. Because

The Current State of House of Worship A/V

With COVID restrictions slowly lifting, more and more people are emerging from their homes and getting back to normal. But what is normal anymore? Many houses of worship opted to have live streaming and conduct service almost completely virtually during the height of the pandemic. But as more re-enter to their normal lives, prior to quarantine and restrictions, audio visual systems have become not only